The lion is the symbol of the TFP. What does this old heraldic symbol convey to people of the modern age?

It combines three qualities in an attractive way, strength, movement, grace. TFP’s lion is not ​​a brutal ferocious lion. On the contrary, it suggests the elegance, nobility and bravery of a crusader lion. These qualities give this lion its charm.

Then there is the bearing of the head. He holds his head high, in a gallant way. He looks the adversary in the eye, while his claws prepare for the coming battle. The tail forms a kind of victory loop, as if to say: after the attack comes victory.

Another noteworthy point is the waist. Instead of arising from a pronounced abdomen, our lion’s bust arises, almost like a fountain, from a slender waist. His legs are symmetrical, elegant, yet planted firmly on the ground.

And why do we use red in the background? Bright red evokes the fullness of life and victory.

This lion charms people ‘of good will’ and irritates the ‘bad-willed’. Why does an old heraldic symbol evoke such passions in moderns?

Because to the revolutionaries and communists it evokes the power of God. At the same time, it is a symbol of hope, enthusiasm, and a call-to-arms for those who wish to fight on God’s side.

What enchants and stirs enthusiasm in the human souls has a stately charm. And that is the charm of the TFP’s lion rampant. 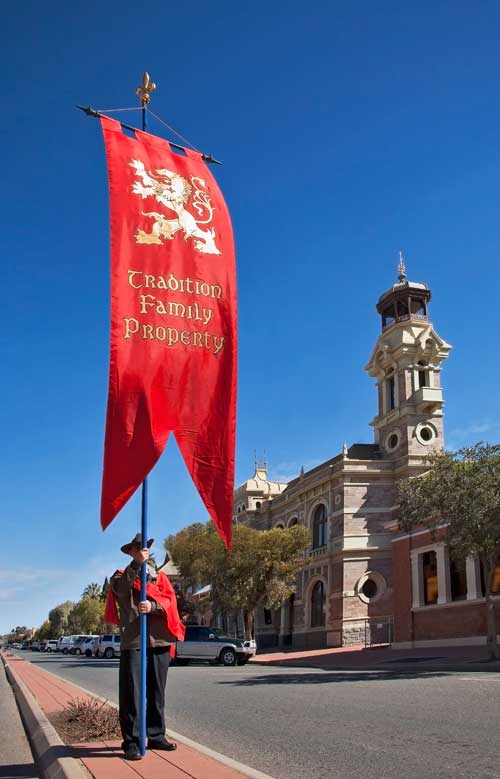