Plinio: a Man For Our Times

This account of Plinio Corrêa de Oliveira’s life reads as a gripping story. His was a life packed with public action. He was one of Brazil’s foremost Catholic laymen and a leader in the struggle against the anti-Christian secularist movements that arose in Latin America during the twentieth century. However, his horizons went far beyond his native land. Continual liaison with overseas friends and organisations led, amongst other things, to the formation of TFP associations in twenty countries. In this biography (the second in the English language) Andrea F. Phillips also takes us into his personal life. We see a man with a demanding and hectic daily schedule who nonetheless finds time to live a deep spiritual life, who reads voraciously, and who devotes quality time to family, friends and colleagues.

He wrote 4,000 newspaper articles; fifteen books; delivered tens of thousands of speeches, lectures and talks; left over a million pages of notes and correspondence.

This prodigious output was due to his early discovery of how to balance a dynamic exterior life with an interior life of deep piety. Plinio was an ardent advocate of the teachings of the great spiritual master, the Benedictine Dom Chautard. This harmony between the interior and exterior life of the soul gave him great mental stability matched by tremendous energy.

A facet of his life that touches the reader is his childhood formation under the loving tutelage of his mother Dona Lucilia (‘Dona’ being a first-name title for Brazilian women). Without this formation, his adult life – with all its accomplishments – would have been unlikely. The reader encounters the tranquil, charming, and deeply religious life of old Sao Paulo, a city in the early twentieth century that was so unlike the frenetic megalopolis of today!

And the reader rests a little from today’s furore in that ambience of Dona Lucilia, an ambience at once serene, loving, and profoundly pious. 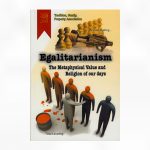