On the website of the Chinese Patriotic Catholic Association we read:

“The Chinese Catholic Church deeply loves her motherland. We adhere to the magnificent tradition of patriotism and love for religion. We adhere to the principle of the independent and self-governing Church. We will maintain the course of Sinification. We adhere to the voice of adaptation to socialist society and, under the leadership of the Communist Party of China, we will work with people of all nationalities in the country to realise the greatness of the Chinese nation and will be unremitting in our efforts to revive the Chinese dream.”

Love of country is a virtue and we applaud those Chinese who genuinely love their country. That said, we deplore the xenophobic nationalism now sweeping China.

What do the bishops of the Patriotic Association mean by “the magnificent tradition of love for religion”? We fail to find any evidence that the Chinese Communist Party has a tradition of love for religion, let alone a magnificent one. The more typical attitude was that of Mao, who once remarked “Religion is poison.” And Mao made his point by destroying as much as he could of religion in China.

Leaving aside the mysterious “magnificent tradition of love for religion”, what is certain is the bishops of the Patriotic Association are placing themselves at the service of the Communist Party. This policy of Sinification, to which they pledge themselves, is the policy of reducing the Church to absolute obedience to the Party.

And what about the Church being a “voice of adaptation to socialist society under the leadership of the Communist Party”? The Catholic Church is not, and will never be, a voice for adaptation to socialism. The Patriotic Association’s bishops are working “to realize the greatness of the Chinese nation” and say they “will be unremitting in our efforts to revive the Chinese dream.” What Chinese dream? This dream is none other than the delirious dream of becoming the world’s hegemon. It is the dream of Xi Jinping and the whole communist hierarchy.

What is strikingly absent in the bishops’ grandiloquent statement is any sense of mission to save souls. Their preoccupation – when they are not busy with high living and some rather unsavoury scandals – is the implementation of the program of the Chinese Communist Party. 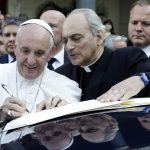 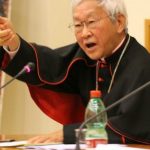