Death in a beautiful valley

On the morning of September 30th 2006, around 100 international climbers were breakfasting at Advanced Base Camp on Cho Oyu in the Himalayas, admiring a view of renowned beauty. Cho Oyu is the world’s sixth highest peak, part of the Himalayan range that falls in Chinese-controlled Tibetan territory. 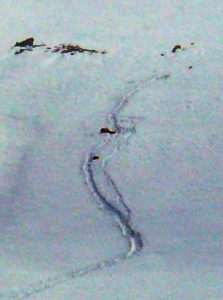 Kelsang Namtso lying in the snow after being shot and killed.

The previous day Chinese border troops had strolled through their camp and were still nearby in the morning. They seemed to be looking for something. As the mountaineers ate, a long column of men, women and children was seen making its way from Tibet towards the Indian frontier. The alpinists watched in horror the Chinese troops casually began firing at the Tibetans in the valley below. The group of refugees dispersed, frantically dashing here and there in the deep snow. “They’re shooting them like dogs,” exclaimed a Romanian camera-man Sergiu Matei as his camera captured the tragedy unfolding before their eyes.

A figured slumped on the snow. It was a girl called Kelsang. She made an easy target, struggling exhausted and oxygen-deprived up the 18,753 feet (5,716 meters) high Nangpa La pass — a common escape route for Tibetans. Excited about her recent profession as a nun, Kelsang was seeking a new life in India where she dreamed of pursuing her studies. She crawled a short distance towards freedom and lay still, leaving a trail of blood and her home-made backpack behind her. 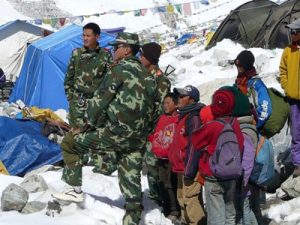 Captured survivors and Chinese border guards at the advanced base camp in Cho Oyu.

One Tibetan man stumbled into the mountaineers’ camp with the troops in close pursuit. The quick-thinking mountaineers hid him and he survived.

The shooting lasted twenty minutes. Then it was over and silence returned to the mountain pass. There were 70 refugees. Half of them escaped over the border to India; half were rounded up by the Chinese.

Kelsang’s body still lies in the snow below Cho Oyu.